Blog
You are here: Home1 / Blog2 / Dental Education3 / Infrequently Asked Questions: Why do we have wisdom teeth? 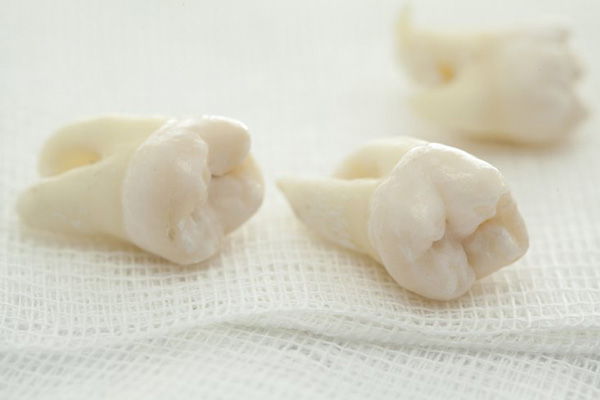 And what makes them so wise?

With millions of wisdom teeth extracted every year, it’s worth asking: If they’re such a (potential) danger to our health, why do we have them at all?

Why do we have wisdom teeth?

The world is full of questions we all want answers to but are either too embarrassed, time-crunched or intimidated to actually ask. With Infrequently Asked Questions, we set out to answer those shared curiosities.
The diet of our earlier ancestors was quite different from the one we have today. It consisted mainly of coarse food like raw meat, nuts, leaves and roots, which required extensive mastication force. Therefore, their bodies were suited with larger jaws that provided enough spacing to accommodate three pairs of molar teeth on each dental arch. Nowadays we boil, steam, bake, chop, cook, cut and dice almost every meal, making unnecessary an extra set of molars. With the evolution of the human race and the change in our diet, our jaws have become smaller and thinner providing no room for the third molars. Evolutionary biologists now classify wisdom teeth as vestigial organs or body parts that have become functionless due to evolution.

So they’re a product of evolution, then?

Yes. Our oldest ancestors relied more heavily on their larger jaws and teeth to be able to consume a tough and chewy diet consisting of leaves, roots and raw meats. Having 32 teeth was advantageous for greater chewing surface area. Having all 32 teeth was also advantageous just in terms of numbers and in the situation when a tooth — or teeth — were lost, there would be other teeth to chew [with]. Over time, man’s jaw has become smaller in size, possibly to accommodate a larger brain and cranium, or due to change in diet. As this has occurred, the jaw, in many cases, has become too small for the wisdom teeth to erupt.

Do all people get four?

Although most people typically get all four wisdom teeth, about 9 to 30 percent of Americans of European descent will get fewer than the ‘standard four.’ About 11 to 40 percent of African Americans and Asian Americans will develop fewer than four. Topping the list is the Inuit population of Alaska and Canada, who seem to develop missing one or more wisdom teeth 45 percent of the time. Some people are even lucky enough to develop extra, or supernumerary, wisdom teeth which are referred to as fourth molars. This happens about 2.1 percent of the time and most often occurs in the maxilla or top jaw.

Why are they more likely to not grow in straight — need to be taken out?

If there is inadequate arch space in the upper and lower arches, the jaws, this may prevent the wisdom teeth from erupting fully. Thus, space constraints may cause wisdom teeth to grow in at different angles. Once they come in partially, the overlying gum tissue can become infected due to food impaction in the area, as the wisdom teeth are hard to clean, thus they need to be removed in a timely fashion when patients are young and at the peak of their healing ability.

Why are they called wisdom teeth? Will I be less wise without them?

Third molars have been referred to as ‘wisdom teeth’ since the 17th century. In fact, initially, they were termed ‘teeth of wisdom’ and then later changed to ‘wisdom teeth’ in the 19th century. Eruption of these teeth is between the ages of 17 and 25 when a person reaches adulthood. Linguistic experts agree that they are called wisdom teeth because they appear once the brain undergoes full development. Research shows the brain does not achieve full maturation until the age of 25. Having your wisdom teeth extracted does not mean you will lose your wisdom, but you may lose some of the problems associated with them — such as pain, infection and bad breath.

How can people monitor or take care of their wisdom teeth properly?

Seeing your general dentist every six months is a great start. They will take radiographs, evaluate for decay, gingival health and help reinforce proper oral hygiene. The teeth can be monitored via routine, dental x-rays, panorex radiography or new technology 3D scanners (CBCT). If your wisdom teeth are not impacted, a functional occlusion routine evaluation by your general dentist along with radiographs are a great way to monitor wisdom teeth. If they have any concerns, they will refer you to an oral and maxillofacial surgeon for further evaluation and treatment.

By Brandon Baker
Originally published in the Philly Voice